Harry is a beloved 3-year-old male Pekin duck, who spends his days hanging out with his other animal pals on a beautiful farm, or spending time with his favorite humans. One day, Harry’s astute owner noticed that his right wing was drooping. She was concerned the wing might be broken. She immediately made an appointment with Pleasantville Animal Hospital of Fallston for Harry to see his veterinarian, Dr. Rebecca Gounaris.

Upon arrival, Dr. Gounaris gave Harry a physical exam, and concurred with Harry’s owner about the wing. In the image below, you can see that Harry’s right wing is hanging low compared to the left, which is a classic sign of an orthopedic issue of the humeral or shoulder joint in birds.

In order to better understand where the fracture was, and the structural characteristics of the break, Dr. Gounaris took radiographs of Harry’s wing. Sure enough, the x-rays showed a fracture of the humerus, which was causing massive swelling and discomfort.

Dr. Gounaris discussed treatment options with Harry’s owner. It was agreed that they would initially proceed with splinting Harry’s wing, in order to save it before immediately going to surgery. This was because a fracture repair with internal hardware is not only much more invasive, but expensive as well. Moreover, there was the additional risk associated with putting birds under anesthesia. 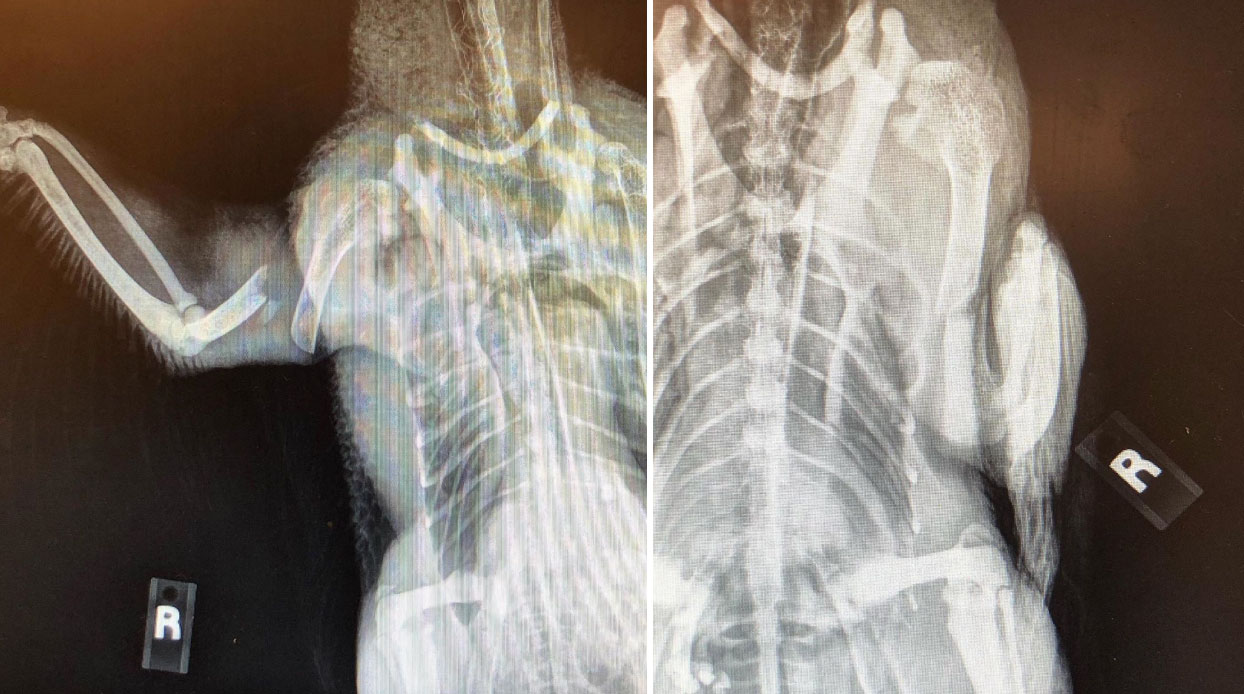 Radiograph taken of Harry’s fractured wing before it was splinted (left photo); and after it was splinted (right photo).
Using just vet wrap bandaging alone, Dr. Gounaris was able to get a pretty decent reduction of Harry’s fracture while he was under sedation. A second set of x-rays were taken for verification. Harry was sent home under strict bed rest with pain medications. 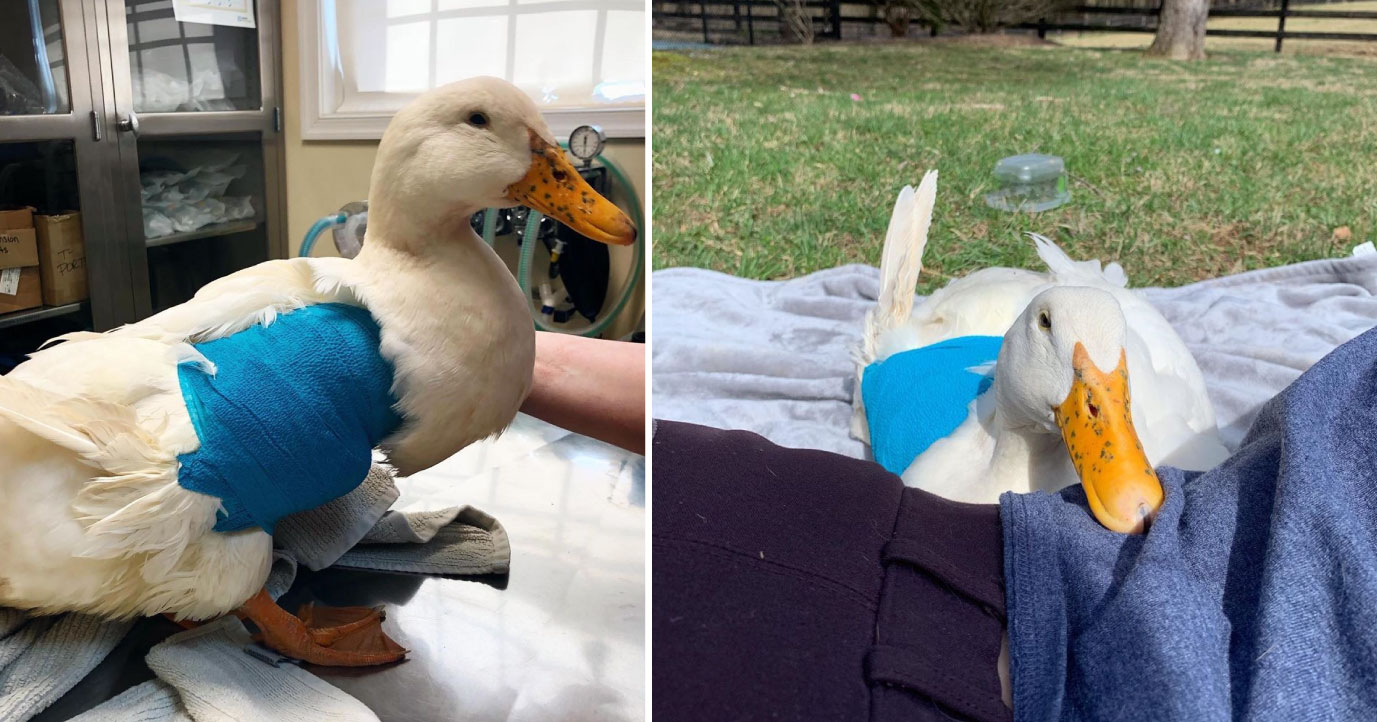 Harry with his wing splint
Unfortunately, a few days later the fracture become an open fracture (the bone breaks through the skin and is outside of the body), and Harry was bleeding through the bandages. After Harry was stabilized, it was discovered that the bone had not only broken through the skin, but was becoming infected.

The next treatment option was surgery. However, Dr. Gounaris did not want to introduce hardware into the fracture, as this could continue to serve as a nidus for infection. The decision was made that it would be in Harry’s best interest to amputate the wing.

Harry’s open fracture (left); Harry recovering from surgery (right photo).
Dr. Gounaris proceeded with the amputation surgery on Harry’s wing. Harry did well under anesthesia, and there was no complications. Harry quickly recovered, and in only an hour after surgery he was eating and drinking like normal.

Harry was discharged from the hospital, where he was given lots of love and treats by his favorite humans. Harry was lucky to have the option of wing amputation, as it is not a viable option for wild birds, but for pet birds they can do very well. Harry did not fly before surgery, and does not bear any weight on the wings, so other than being a little off balance at first, he was able to adapt to his new body very quickly. Harry's owner kept a close eye on the incision site during his recovery.

Dr. Gounaris holding Harry (left photo); Harry hanging out with his human mom at home (right photo).
A week later, Harry returned to Pleasantville Animal Hospital of Fallston for a progress exam so Dr. Gounaris could evaluate how the incision site was healing, and to remove the stitches. There were no complications, and Harry’s wing fully healed. Harry is now back to his normal happy duck life visiting his friends, and adventures with his humans who love him dearly!

About Pleasantville Animal Hospital of Fallston

Pleasantville Animal Hospital of Fallston, located in Fallston, Maryland, is a family-owned, full-service hospital that provides veterinary services for dogs, cats and birds. Their expertise in the field now spans over three family generations, and they are very proud of this unique heritage. The hospital has an in-house laboratory, allowing for rapid diagnostic testing for critical care patients, digital radiography (xrays), surgical suite, and an on-site pharmacy. Dr. Scott Gounaris has been practicing veterinary medicine for 35 years and founded Pleasantville Animal Hospital in 2002. His daughter, Dr. Rebecca Gounaris, now works alongside him, and they approach each case as a team.

Dr. Rebecca L. Gounaris is a 2016 graduate of the Virginia-Maryland College of Veterinary Medicine and is Dr. Scott Gounaris's oldest child. In addition to her lifetime love for cats and dogs, she has a deep passion for birds and participated in externships at several exotic veterinary clinics during her senior year. She has also worked for many years at Tri-State Bird Rescue & Research in Newark, DE, starting while she was earning her undergraduate degree at University of Delaware, and continues to provide veterinary care there to wild birds in need. After spending much time away from home for her education, she is thrilled to be practicing medicine back in her hometown and alongside her family members. She is a member of the Avian Association of Veterinarians, American Veterinary Medical Association, and Maryland Veterinary Medical Association. She also competes in synchronized ice skating and has two cats, Arwen and Pippin, a Sun Conure, Nino, and a Green-cheek Conure, Dutch.

Dr. Scott Gounaris graduated from the University of Florida Veterinary School in 1982. His lifetime love for animals drove him to choose veterinary medicine as he wanted to help animals that could not help themselves. Dr. Scott Gounaris enjoys the teamwork that we and the pet owners employ to work together for the welfare of their pets. The greatest reward for him is a positive outcome for his patient and their owners. With over 40 years of experience in the veterinary field, Dr. Scott Gounaris has seen it all. Prior to opening Pleasantville Animal Hospital of Fallston, he worked for his father, who was also a veterinarian. Now the father of a recent veterinary school graduate, a current veterinary school student, and a college undergraduate, he has shared his love of the profession with the next generation of Gounaris doctors.